Other Places to Discover

Other places to discover

It is an old water driven flour mill of late Mediaeval origin. It is now rebuilt in Neo-Arabic style and used for the storage of resale grain. The first historical references date from the mid-fourteenth century.

It underwent several renovations until 1829 when it was severely damaged by the earthquakes. The current structure dates from 1919 when it became an electricity plant. It is owned by the Compañía Riegos de Levante (Levante Irrigation Company) and was in use until 1960.

Canal gates and an electric traction lift built in the early 20th century to capture and channel remaining waters at the mouth of the River Segura. It was inaugurated by King Alfonso XIII, who was the company’s largest shareholder.

It’s built in wrought iron with rivet trusses on the masonry work. It is a good example of iron engineering, a late consequence of the Industrial Revolution.

This bridge was built to cross the River Segura over the N-332 National Coastal Road. It replaced an older Baroque style stone bridge that was destroyed by a flood in the late 19th century. A provisional wooden bridge was built. The Iron Bridge is still kept today as a local heritage site.

This water elevation device belongs to a ‘crown’ type waterwheel moved by animal traction. It is made up of a mechanism of two wheels: the waterwheel and the trolley or counter wheel. The boxes or buckets are the same body as the waterwheel. This allows for water to be elevated at a lesser height.

It has been restored and is exposed in a public garden space walking down towards the Reina Sofia Park on Enginyer Mira Street.

It was built in 1962 by the American Navy, within the framework of collaboration agreements between Spain and the United States. With its 375 meters it is the tallest military structure in Europe and the tallest construction in Spain.

This antenna consists of a metal structure in the shape of a mast with a triangular section, with steel cable anchors and a maintenance elevator located in the centre of the tower. It is used for the transmission of orders to submarines. It goes into operation before the submarines of the Cartagena Arsenal naval base go to sea, and it shuts down when the submarines have already entered the base again. The transmitter is controlled from the Rota Naval Base station in Andalusia.

It is an ensemble in the coastal woodlands made up of a nursery, a forest house, a tool house and a cistern. The whole complex is related to the Guardamar Sand Dune Reforestation Project carried out between 1900-1930. The space is made up of:

Built in 1901 it is the only one that remains active at present. Its initial structure is as follows: A regular nave articulated by a wide central corridor, crossed by window boxes with solid bricks and decorated with polychrome ceramic panels. On both sides of the corridor, the garden grills are structured like rectangular plots of different measurements.

This is the nursery for reforestation species such as Aleppo pines, stone pines, cypresses, carob, etc. A first expansion started in 1910 and another, since the 1970s, to produce plants for Guardamar and other areas in the region.

It was originally a storehouse until it became the forest guard’s home. Another unique building found in the nursery is known as the ‘nursery’s tools cabin’.

Water wells were built in the nursery’s subsoil to irrigate tree species proving to be a highly effective solution. However, a cistern was built in the 1950s to seize and store drinking water. It is an important example of water culture. It is made up of a water capture pipeline on the floor that lets the water flow into the tank and an access on the top. The water collection system is completed in the rear with a spillway to let out surplus water.

The ‘Engineer Francisco Mira Botella Memorial’ is located in the square, next to the water tank. It is an idealised bust of the engineer wearing the forest ranger’s gala uniform. It stands on an Art Deco pedestal with an inscription in relief. This bust was fashioned by Agustin Pantoja Mingot, a renowned sculptor and artist from Alicante.

This monumental sculpture was made to honour the engineer for all the years devoted to the Dunes Reforestation Project. In fact, the inscription states that he was named a ‘foster son’ of Guardamar.

Download  Map of heritage Guardamar with all the places you can’t miss. 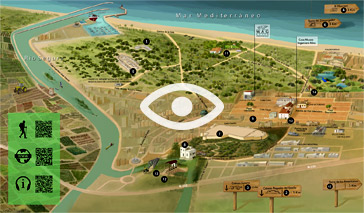