The Lady of Guardamar

The Lady of Guardamar

‘La Dama de Guardamar’ was discovered on September 22, 1987 in the nearby archaeological site of Cabeço Lucero, a few km from the town’s centre. A large piece of a stone wheel was the first fragment found of an Iberian lady’s bust, with clothing similar to the one worn by the Dama d’Elx or Elche. The excavation provided many more items, including a large fragment comprising the headdress, face and neck. Unfortunately, the sculpture was found in pieces since it had been hammered and even had suffered from fire.

It was taken to the laboratory of the Archaeological Museum of Alicante where restorer Vicente Bernabeu began washing and identifying the remains. A piece appeared with its chin, the other with the lips, although the lower right one had been eroded. Pieces were also found of the breast and collars, and many other pieces of stone belonging to the work, that did not fit with each other nor did they have any carved surface.

The task was a delicate and painstaking restoration, lasting from October 1987 to June 1988, when it was completed. Vicente Bernabeu’s restorer expertise and artistic ability managed to bring back to life a piece of extremely difficult recovery. Now, even with what it lacks, it shows us its beauty as it must have been straight out of the sculptor’s hands 2,500 years ago. 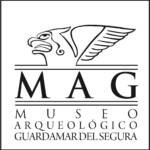