If you are in love with nature and wish to discover hiking trails these excursions will make you discover Guardamar in depth either walking or cycling. They are nice easy routes also suited for an extended family holiday.

We now propose 8 fully explained excursions to make it easier for you to pick your own choice. You can also download a map to plan your excursion with ease.

The itinerary leaves the town along the Engineer Mira Promenade (Passeig de l’Enginyer Mira). This promenade was Guardamar’s first road through the dunes to the beach, opened in 1903. After the first 300 metres turn left and cross the pinewood reforested in the early 20th century to stop the shifting sand dunes from advancing and burying the town.

During the second half of your walk there is a range of shifting sand dunes on your right stretching along the beach. The Marina de les Dunes Yachting Club and the mouth of the River Segura are at the end of this road with no traffic. There are some magnificent views of the dunes and pinewoods.

This route runs along the right bank of the final stretch of the River Segura to the north edge of town and the pinewoods till you reach the Marina de les Dunes Yachting Club and the Fishing Port.

Birdwatchers will enjoy the many species of aquatic birds in the stretch of river where the transition between the river’s fresh and salt water happens.

Follow the river some 600 metres to the west till you find a pass that crosses the river and cross it over to the left bank. A stretch of the path where you have walked is located between the old Segura River bed and the new channel opened in the late 1980s to avoid floods.

This is actually the point where the river receives the final drainage of the farmlands in the Vega Baja district through a system of multiple ditches.

Cross the river by the old bridge and walk amongst the pinewoods and the river to the sea. This route is ideal for watching waterfowl, providing access to one of the most pristine beaches of Guardamar. We must remind you that ‘Els Tossals Beach’ is a naturist or nudist beach.

Tour 4: The farmland or ‘Horta the Guardamar’ Route

This route shares the first section with route 3 up to the first ford.

This route shares the first section with the previous one described. Once through the channel, follow the left bank (north shore) to the west, upstream, until you find the bridge at the old road to the city of Orihuela .

At this point turn right on the paved road and follow the route of the canal known as ‘dels Horts’ to the passage known as ‘La Inquisició’ in the neighbouring district of Rojales, enabling you to link with Route 5.

Walking along the ‘Séquia dels Horts’, one of the largest and oldest in Guardamar, you will see the region’s traditional garden farming irrigation area.

Tour 5: The River and Hills Route

Crossing the iron bridge, walk along the left bank (north shore) of the old River Segura’s bed to the west to find the new riverbed, follow it on the right bank (south shore), also to the west. At the end the Inquisition passage allows connection to Route 4, being able to combine one way and the other back.

The route has many interesting items of our historical and archaeological heritage: You will be able to see how our water is used (14th century AD dams and mill, ditch gates from the Levante Irrigation Company or even ancient animal traction lifting devices).

The archaeological sites are on the hills bordering the farmland valley: the Phoenician citadel known as the Cabeço Petit de l’Estany (Small hill over the pond), the Iberian settlement of the Cabeço Lucero (Star Hill) and the Islamic fortification and also the Cabeço Soler or Soler Hill.

An exclusive bike lane connects Guardamar and Torrevieja along the N-332 Coastal Road.

At km 65,5 you will see the entrance to the LA MATA SALT LAKE LAGOON NATURAL PARK INTERPRETATION CENTRE.

The La Mata and Torrevieja Salt Lakes were historically known as the Guardamar Salt Lakes since they were a part of our district and the northern shore still is.

This is a a natural park of great ecological value for its flora and fauna and a major European migratory bird resting area.

Tour 7: The path to the Castle

The path network around Guardamar Castle is 1,2 km long. You will be able to visit the site and walk around the old walled town and the remains of the fort. You will enjoy a privileged view of the town, the district and the Mediterranean bay a little over a kilometre away.

Accessible from Route 1, the pinewoods offers 3.3 km of pedestrian roads and path since motorised traffic has been forbidden except for ambulances, police, special services and cycling.

You will be able to enjoy an extremely attractive part of the woodlands between the town and the River Segura whilst you admire the reforestation plan carried out a century ago by Engineer Mira.

Download the Guardamar del Segura route and excursion map at the following link. 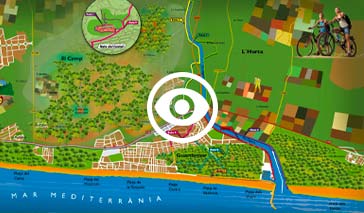